Without Whom None of This Would Be Possible... by Alfred Hickling

Most of us can remember a teacher whose influence and enthusiasm shaped our future careers, even in ways we might never have imagined. In my case it was Darrell Buttery, who we were delighted to learn has received an MBE in the New Year's Honours List.

Mr Buttery's trip to the Palace is in recognition for his work as former chairman of the Civic Trust, as a key figure within the York Georgian Society and for his tireless work on behalf of the city's heritage. But he really deserves a medal for his services to education as well. Throughout 1980s, he taught English at Nunthorpe Grammar School; where he introduced me to Shakespeare, Dickens and - rather more off-currciulum - Laurence Sterne's Tristram Shandy; having intuited that a teenager smitten by Douglas Adams's Hitchhiker's Guide to the Galaxy series might be interested to discover the York-based canon who laid the template for all free-wheeling, meta-fictional comic narratives to come.

But it wasn't Mr Buttery's literary guidance that made an impression so much as his Local Studies course. Basically this was a way of bunking out of school early on a Tuesday afternoon in order to spend time wandering round the city. At first, like many in the class, I thought this beat actual lessons hands down. But over the course of these walks my understanding of the city completely changed. Growing up in a place like York, it's easy to take history for granted. But Mr Buttery led us around a city whose perception of itself was rapidly being transformed. The Coppergate dig was in the process of revising everything we thought we knew about Vikings. Barley Hall had astonishingly appeared in the middle of a slum clearance project. Best of all, Mr Buttery took us round Fairfax House when it was still decorated like a 1970s nightclub. Workmen were just beginning to peel away the decades of emulsion to reveal the stunning Cortese stucco ceilings beneath; which was rather like discovering an antique jewel casket wrapped up in a polythene bag. When the building re-opened as one of the finest Georgian town-house museums in the country, many of the artefacts lying on the mantels and sideboards came from Mr Buttery's personal collection.

But for those of a certain vintage, Mr Buttery will always hold legendary status as the impresario of the annual Georgian Ball, staged at the Assembly Rooms as a joint social venture between the sixth forms of Nunthorpe and the nearby girl's grammar school, Mill Mount. In the 1980s York still retained selective, single-sex education. The Georgian Ball was not merely, therefore, an opportunity to turn a quadrille in authentic frock-coat and britches; it was an officially sanctioned opportunity to get your arms around a member of the opposite sex. For educational purposes, obviously.

One day we'll be able to get the inside information on what really went on at the Assembly Rooms as Mr Buttery has deposited his voluminous personal diaries with the Borthwick Institute at the University of York. In years to come, when researchers want to take the pulse of life in York around the turn of the millennium, they will doubtless have recourse to the man who might turn out to be our city's Samuel Pepys. But for now, heartfelt congratulations and many thanks to the teacher who helped me realise what a remarkable city I had the privilege to grow up in. As I say, those Tuesday afternoons beat working any day of the week. 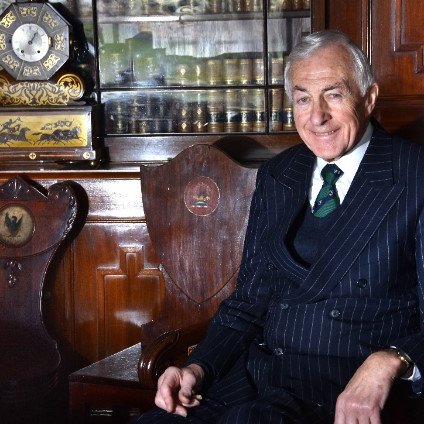