There were fifty trade guilds in medieval York - some fairly self-explanatory, such as the societies governing butchers, bakers and carpenters; others rather more obscure, like the cordwainers, for example. (A cordwainer was responsible for quality footwear - only the poor unwashed would take their disintegrating shoes to a cobbler).

The great legacy of these proto-trade-unions-cum-amateur-dramatic societies was the cycle of 14th century religious dramas which presented the Bible as a unique, interactive roadshow wending its way through the streets of York (a tradition to be revived again this year when the Wagon Plays roll out in September). The other great bequest of was their meeting halls; of which four remain, though it can be a devil of a job gaining access at a time when all of them are open.

Fortunately the greatest and grandest, the Merchant Adventurer’s Hall, can be visited all year round (the cafe comes highly recommended too). As for the others, you may need to join the relevant guild, or get invited to a lavish wedding reception, to see what goes on inside them. But the York Resident’s First weekend, which takes place annually in late January, afforded the rare opportunity for a complete guild hall crawl. 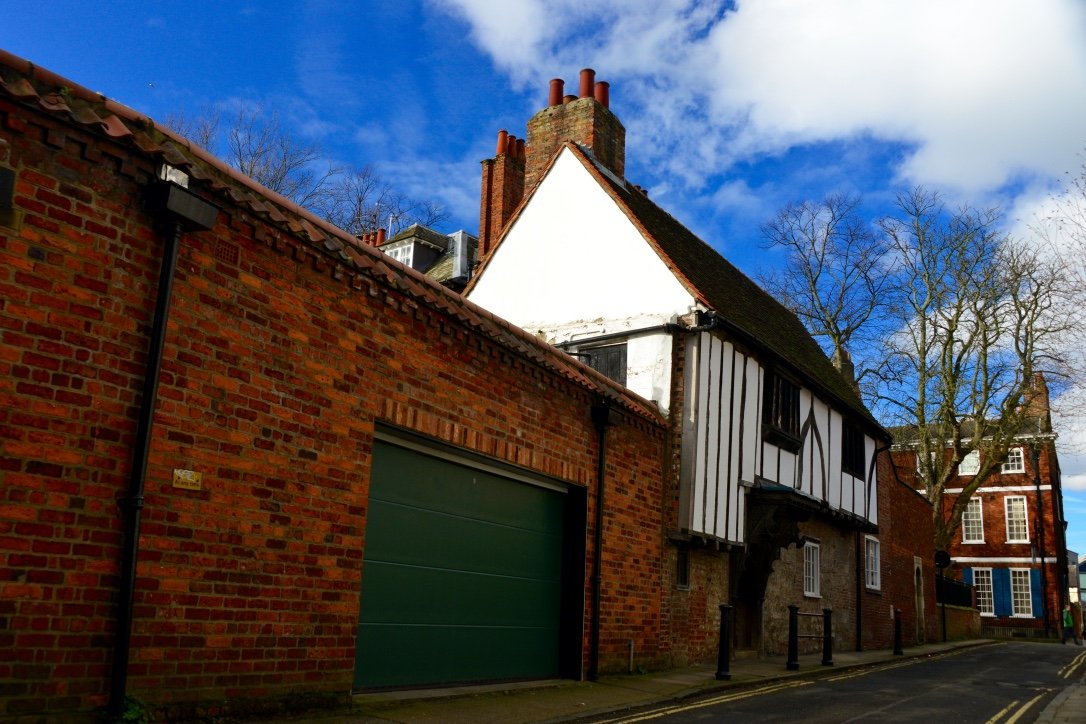 First up, Jacob’s Well in Trinity Lane off Mickelgate. This is the only one not to have originally been built as a trade hall, though it currently hosts meetings of the Butcher’s Guild, and has undergone a fair amount of butchery in its 550 year history. Originally part of the Benedictine monastery of Holy Trinity, it later became the home of Isabel Ward, the last prioress of Clementhorpe, whose annual rent, rather romantically, was a single red rose payable on Midsummer Day. That’s probably 20,000 bouquets of red roses in today’s money. In the 18th century the building gained an additional brick upper storey when it functioned as a coach house, stables and pub. The top heavy Georgian extension came down again in 1991; though the building’s incarnation as a pub is commemorated by the elaborately carved canopy above the door - though this is another transplant, having originally framed the entrance of the demolished Wheatsheaf pub in Davygate. 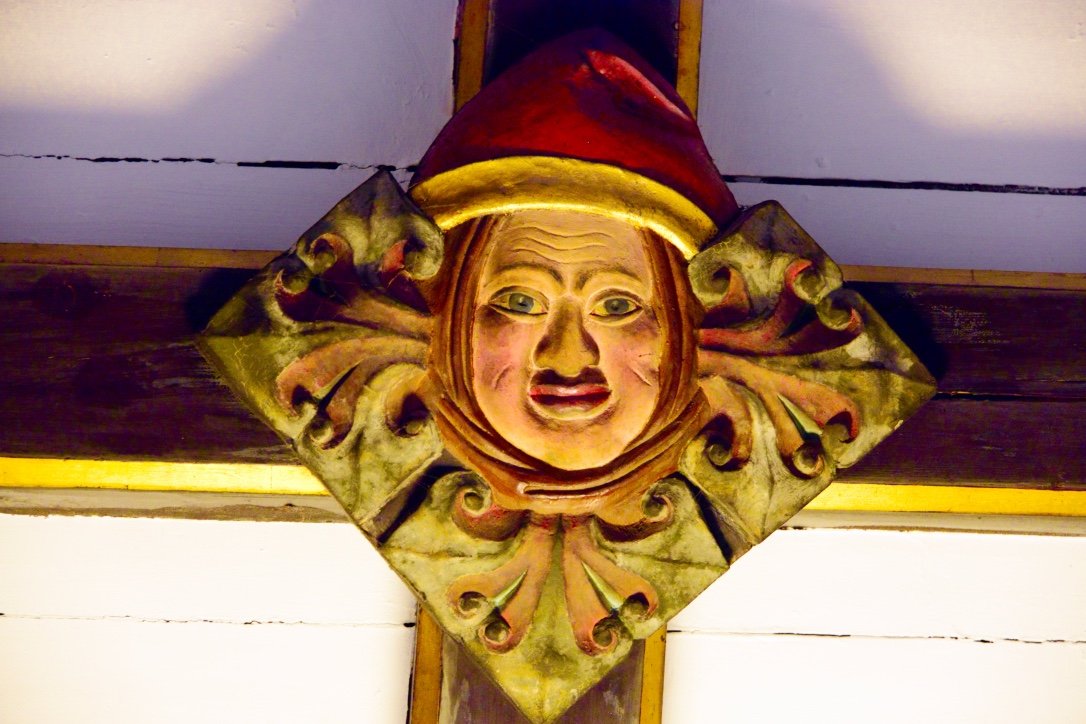 From here we move on to Peaseholme Greeen, site of St Anthony’s Hall, dedicated in 1446 as a general purpose building for guilds that lacked a headquarters of their own. 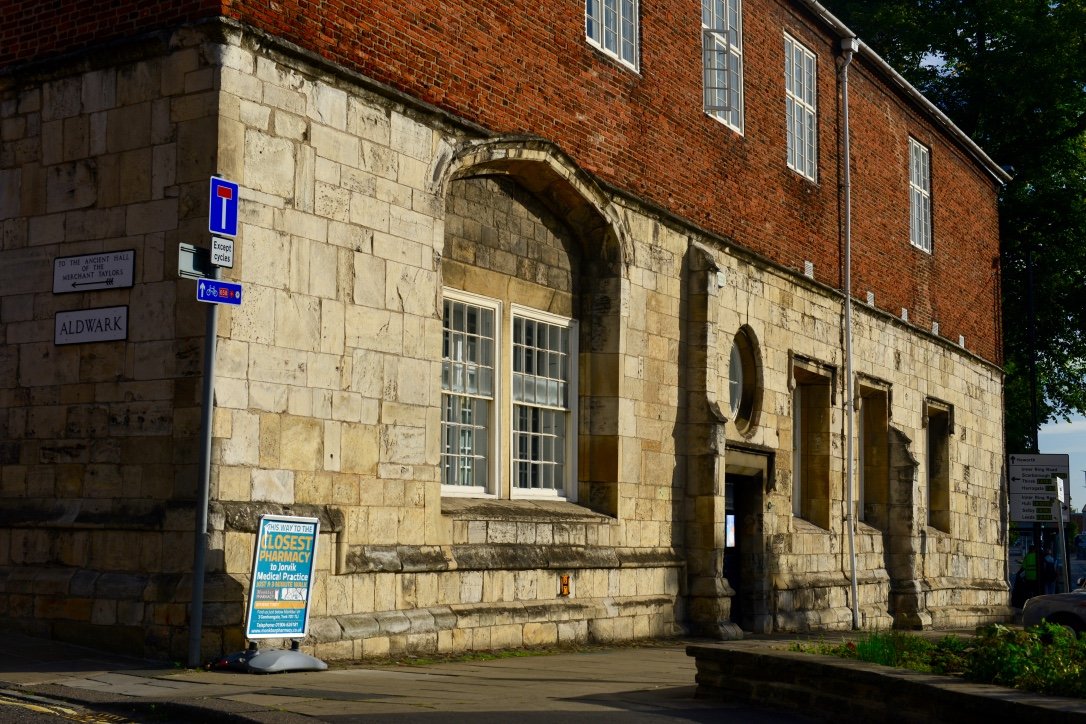 A clue as to who met here can be found in the carved roof boss illustrating a particularly succulent-looking porker, the animal associated with St Anthony - patron saint both of butchers and skin diseases - who defeated Satan in the body of a ferocious pig. Henry VIII was entertained here with his fifth wife, Katherine Howard. Since then it’s been a house of correction for fallen women, a charitable Bluecoat school and the sadly-missed Quilt Museum. It’s now occupied by a church. 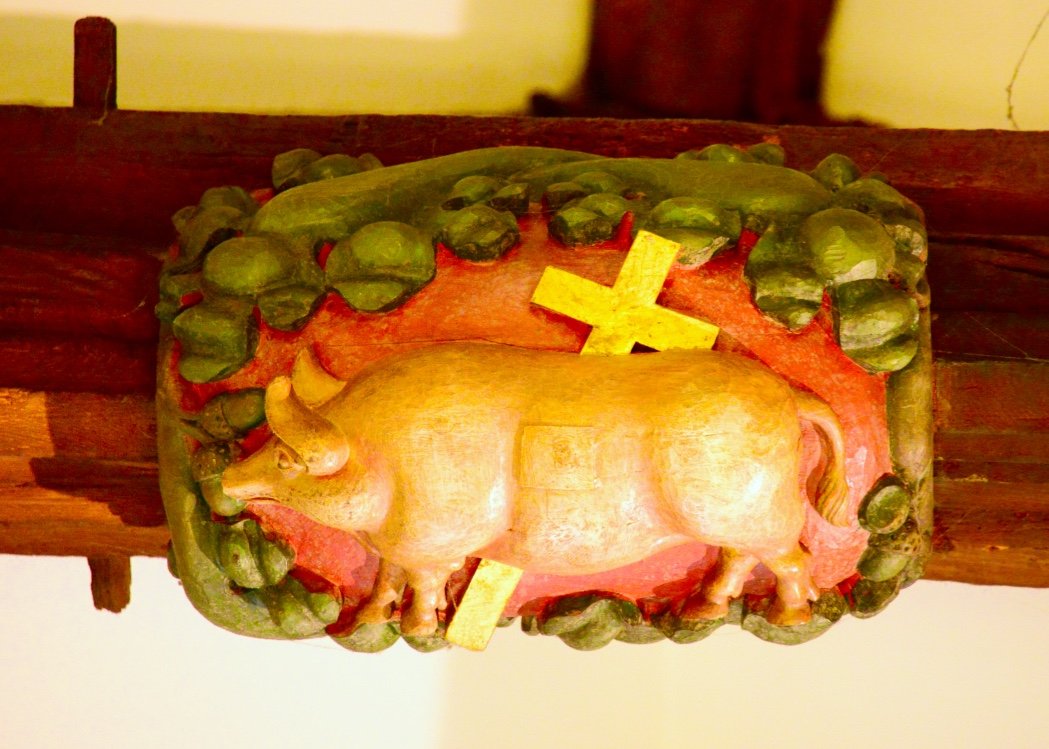 One Satanic pig, spit-roasted on a crucifix

A short stroll from here at Aldwark, the Merchant Taylors’ Hall was the only one to rival that of the Merchant Adventurers’ for size and prestige. Originally it would have looked very similar, though its half-timbered walls were re-clad in the early 18th century in more fashionable and durable brick. 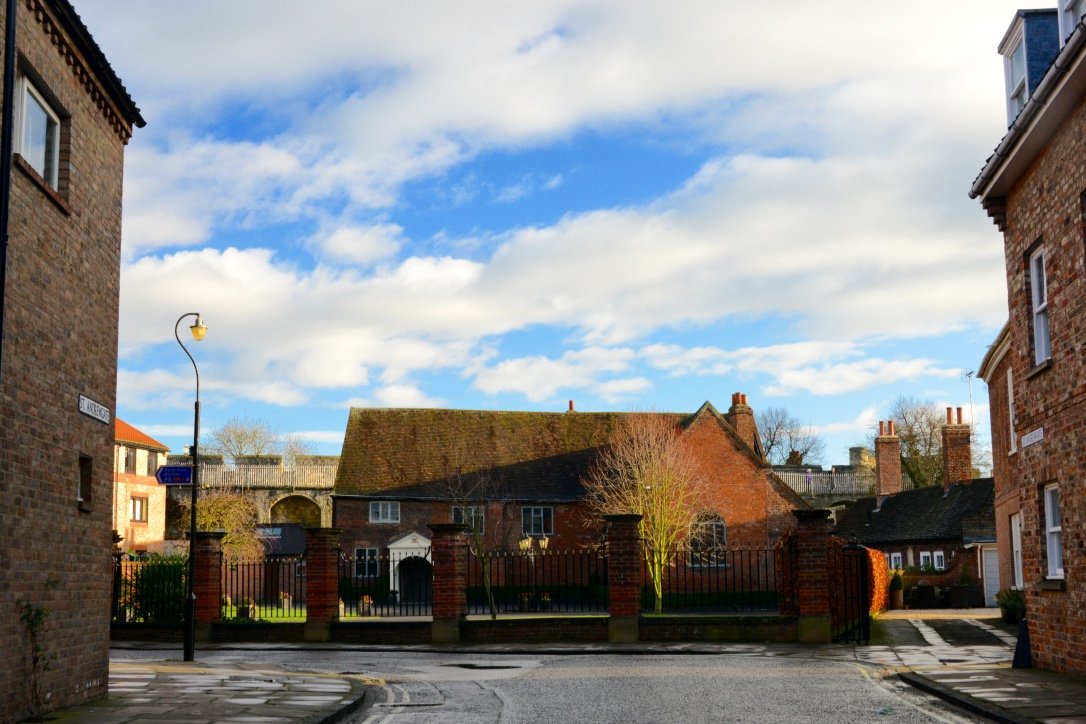 Notable here are multiple examples of a coat of arms featuring two rampant camels - not an animal you’d normally expect to find in York - though it is associated with the guild’s camel-skin-clad patron John the Baptist (a stained glass image of the saint can also be found at Holy Trinity Goodramgate, with the hump and hooves clearly hanging round his waist). 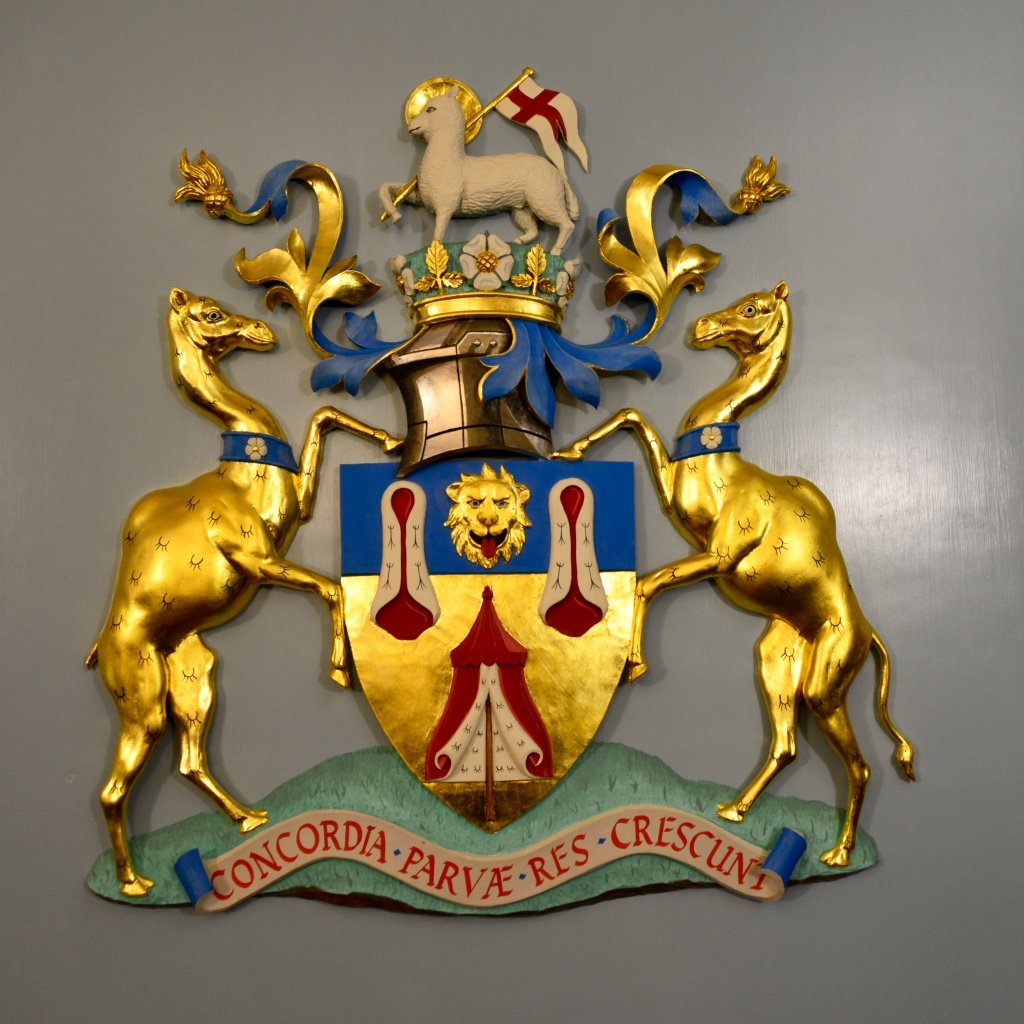 It’s a pity he Merchant Taylors’ hall isn’t open more often, as it offers perhaps the most satisfying fusion of York’s artistic heritage, ancient and modern. The great east window was reglazed by the stained glass artist Helen Whittaker of Barley Studio in 2015 to commemorate the 600th anniversary of the hall. 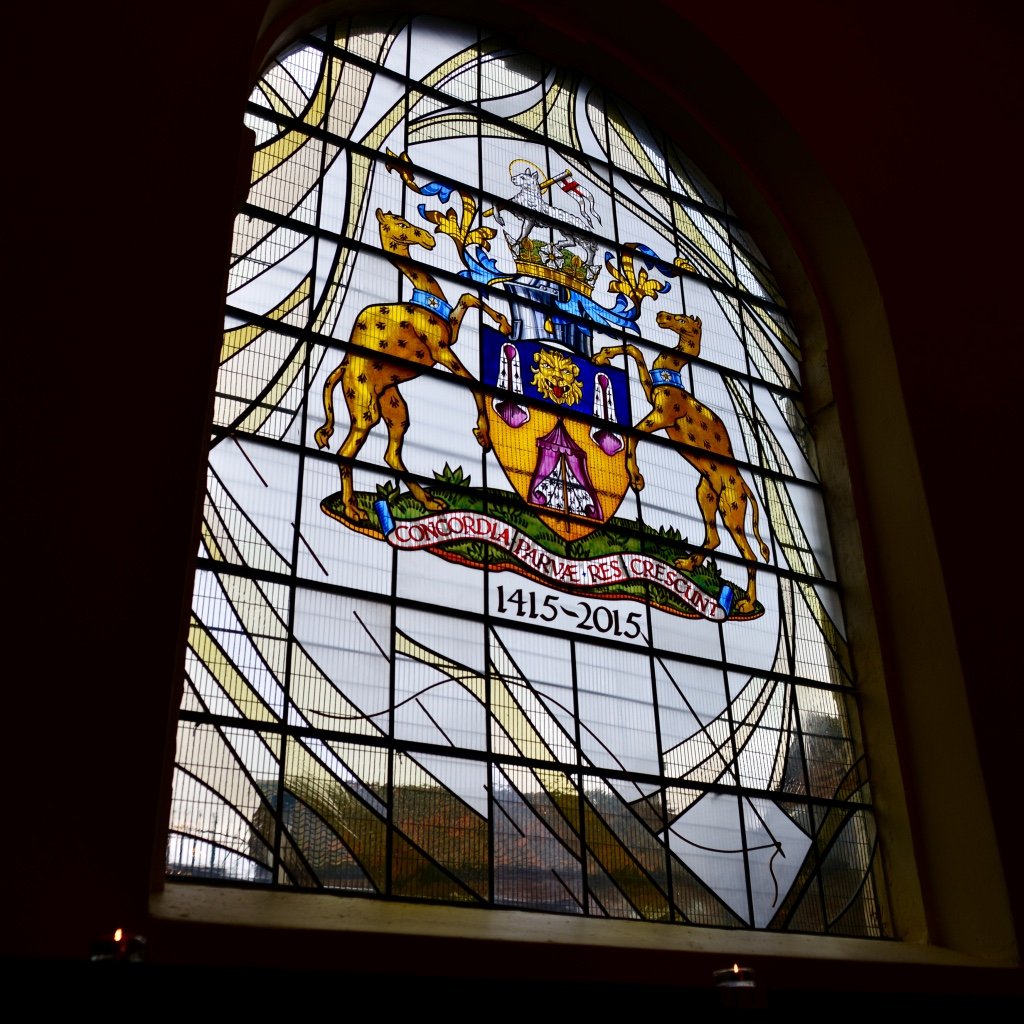 And above the window is a stunning royal coat of arms commissioned in 1964 from the wood-carver Dick Reid (who somehow managed to get it down from his attic studio in Stonegate). This was the masterpiece that established Reid’s career as York’s contemporary answer to Grinling Gibbons. When the finials of the door canopy at Jacob’s Well were vandalised, there was only one man who could be called upon to replace them. Half a century since the guilds were established, York’s reputation for master craftsmanship remains undiminished. 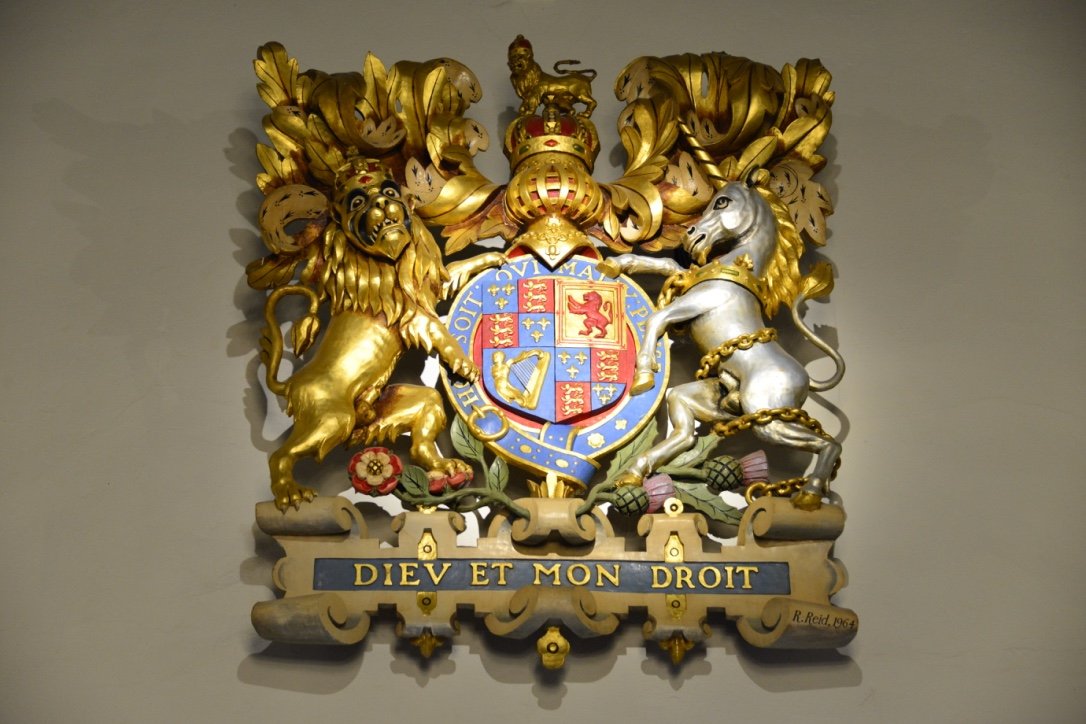 Replacement carved finial at Jacob's Well and the royal coat of arms at the Merchant Taylor's Hall: both the work of Dick Reid OBE 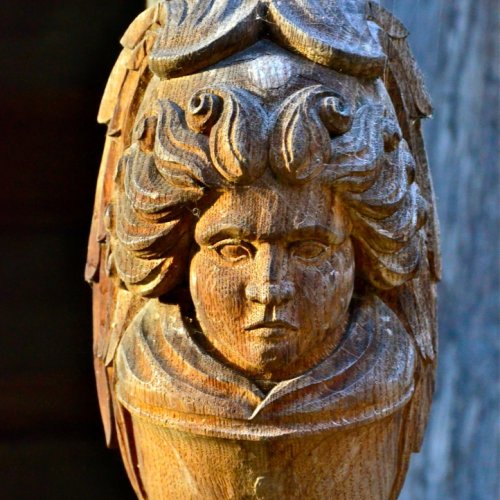