The Streets of York - Four Centuries of Change by Alfred Hickling

Until 1841, Toft Green was a tranquil country lane where York’s pre-eminent Victorian painter, William Etty, liked to stroll. ‘What a lovely walk it used to be’ Etty wrote: ‘ancient fortifications, grey battlements, verdant fields and smiling gardens on either hand’.

It’s hard to imagine what Etty would make of his old haunt today, as smiling gardens have given way to the anguished grimace of a gaping hole in the ground. The giant crater marks the spot where one of York’s least-loved buildings, Hudson House, has finally bitten the dust. Built in the Brutalist style de-rigeur for 1967, Hudson House was the former British Rail Eastern Region headquarters; and though few will lament its passing, the rise and fall of an undistinguished fifty-year-old building has much to reveal about the character of the city as we see it today. 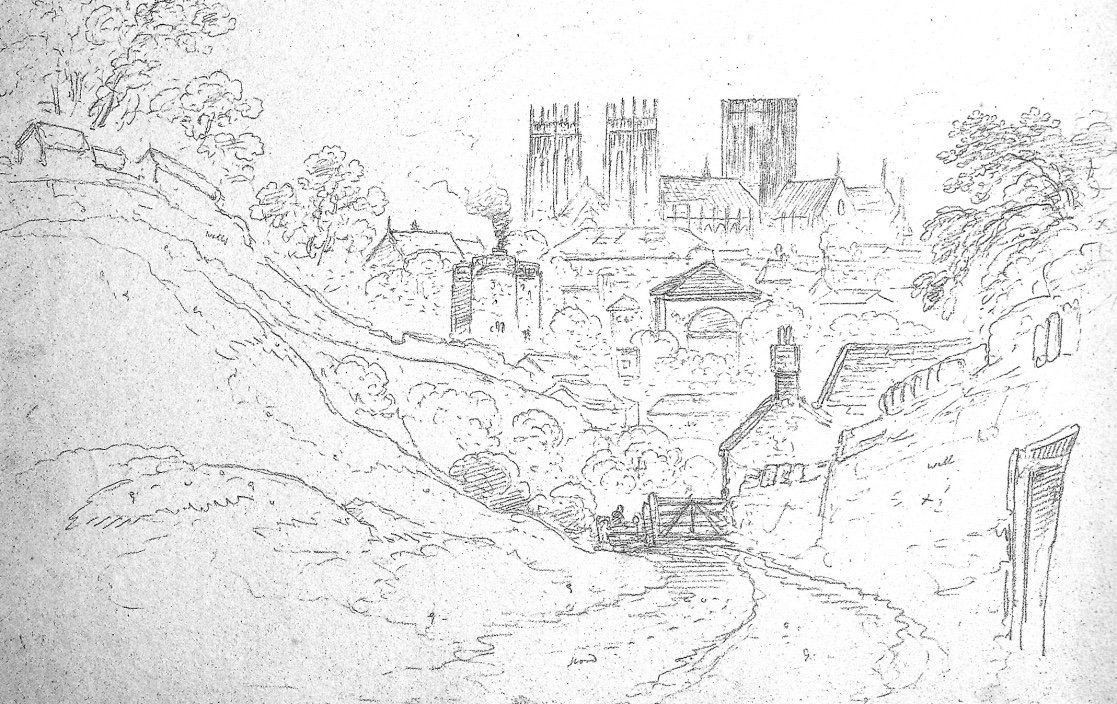 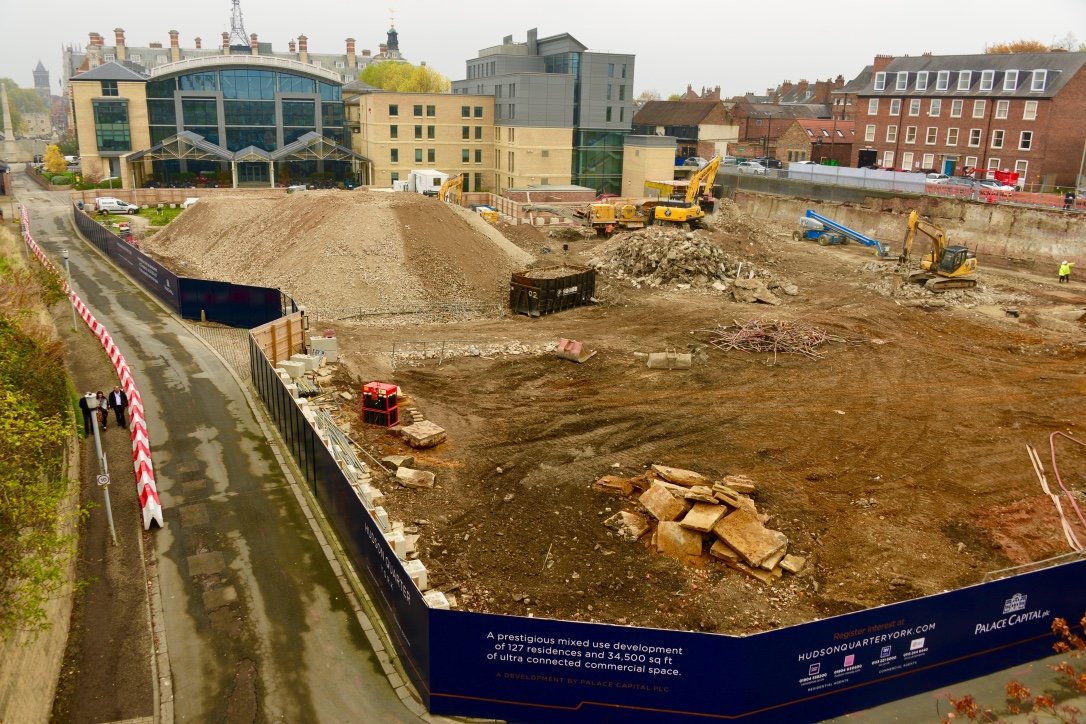 Toft Green: Then. And now.

The march of progress (or otherwise) is the subject of a significant new book, The Streets of York: Four Centuries of Change, jointly authored by Ron Cooke, Stephen Lewis, Chris Shepherd and Darrell Buttery. This handsomely illustrated work, with an accompanying exhibition at St William’s College, presents historic topographical paintings and photographs alongside contemporary images of the same vistas today. Yet it’s the nature of a work cataloguing change that no sooner has the book appeared than the landscape has significantly altered already. George Nicholson’s sketch of a bucolic Toft Green in the 1820s is accompanied by an image of the 1960s horror that stood on top of it. Now that has itself gone; ultimately to be replaced by what promises to be a new mixed office and residential development known as Hudson Quarter; named after the man who first breached the walls to put a railway station on this spot and led to the despoliation in the first place. 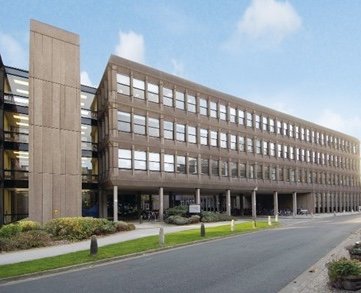 Hudson House: Before a big iron ball smashed into it.

The siting of York’s original station left William Etty frothing at the mouth: ‘For what have the walls been broken?’ he fumed. ‘Absolutely without any real necessity… I am informed that the eminent engineer Stephenson declared it unnecessary and advised against it’. Yet it was the trauma of this intrusion that caused Etty to mount his successful campaign to preserve the rest of the city wall from destruction. When the new station was constructed in 1877 it was located just outside the historic boundary - though a revealing photograph included in the book indicates how for many years the inside of the wall remained fundamentally a goods yard. 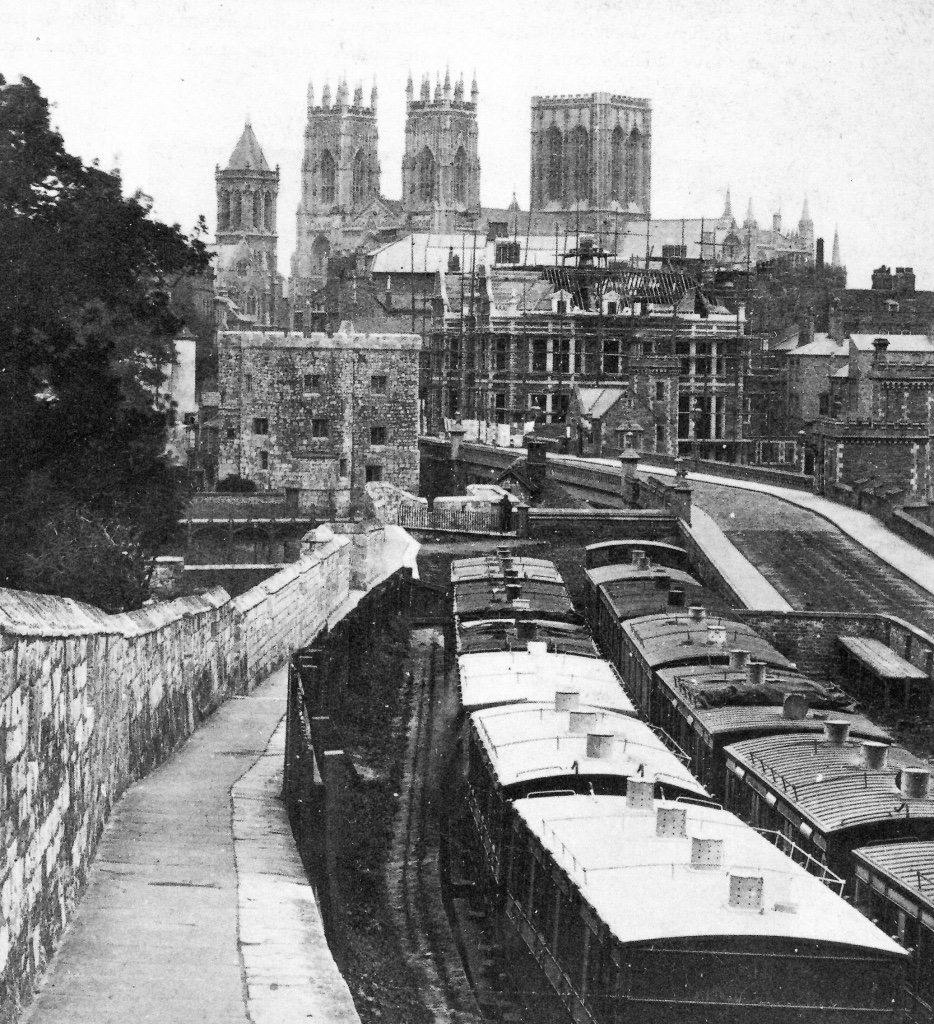 Not quite the picture postcard view just yet.

Some of the archive images included in the book are justifiably well-known, such as William Fox Talbot’s early photograph of Lop Lane, the medieval bottleneck that formed the western approach to the Minster until it was cleared in the 1860s to create Duncombe Place. But the book’s real value lies in uncovering images that are unlikely to have been widely seen before. Particularly striking, for example, is Alfred Gill’s 1970 watercolour of the newly-constructed Viking Hotel. Few would argue that the Viking (now the Radisson Park Inn), built in the same era as Hudson House, makes a pleasing addition to the harmony of the waterfront. Yet Gill’s painting doesn’t record a blot on the landscape so much as a proud vision of modernity - a reminder that this hotel once marked the pinnacle of 1970s opulence. 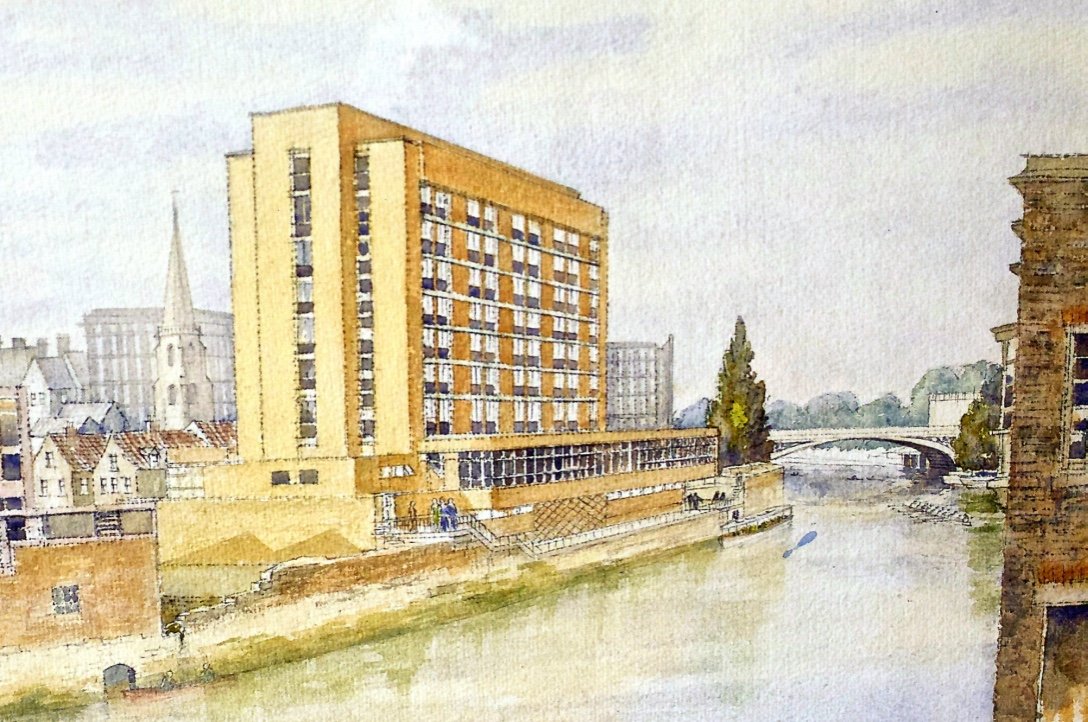 The Viking Hotel in its glory days. Rooms come with the added bonus that you can't see it when looking out.

Today, of course, York is a conservation area where one has to be extremely mindful where to swing a wrecking-ball. Perhaps the most controversial example of that is the multi-million pound facelift nearing completion on York’s ugliest duckling, Stonebow House. Today Stonebow is viewed as a sobering reminder of the kind of unsympathetic post-war urban planning that York mostly managed to avoid. But growing up in a city full of stunning architecture, Stonebow has always been this writer’s guilty pleasure - a building so bad it’s almost quite good - fairly modest in scale for its era like a little pocket rendition of Le Corbusier’s slab and podium utopias. 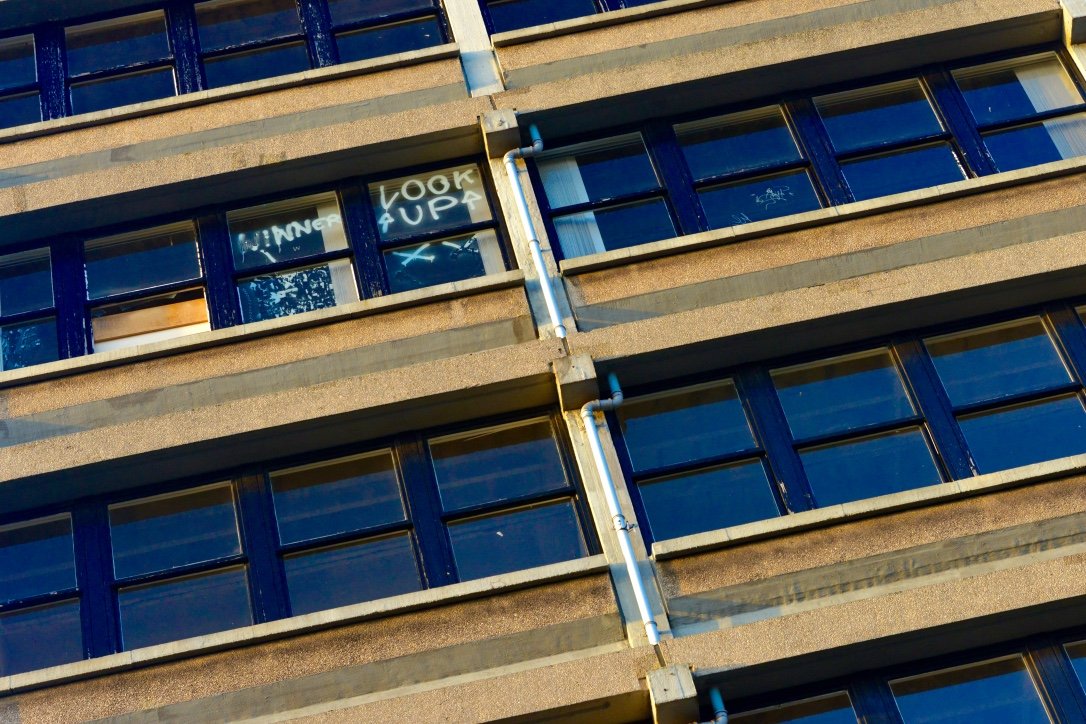 Stonebow House. Nobody loves it. It don't care.

In 2012 the World Monuments Fund placed ‘British Brutalism’ on its concerns list. And before dismissing Stonebow House as an aberration it’s worth considering that York is dominated by a giant gothic cathedral entirely out of proportion with its immediate surroundings. Even the word ‘gothic’ was first applied retrospectively as a term of abuse, implying a building that appeared primitive, unsymmetrical, unsophisticated and inelegant. There must have been plenty of citizens of York in the 1200s watching the old Norman cathedral come down and the new one going up who probably wanted to know what we were doing replacing a perfectly good, Romanesque building with a hideous, great modern thing. 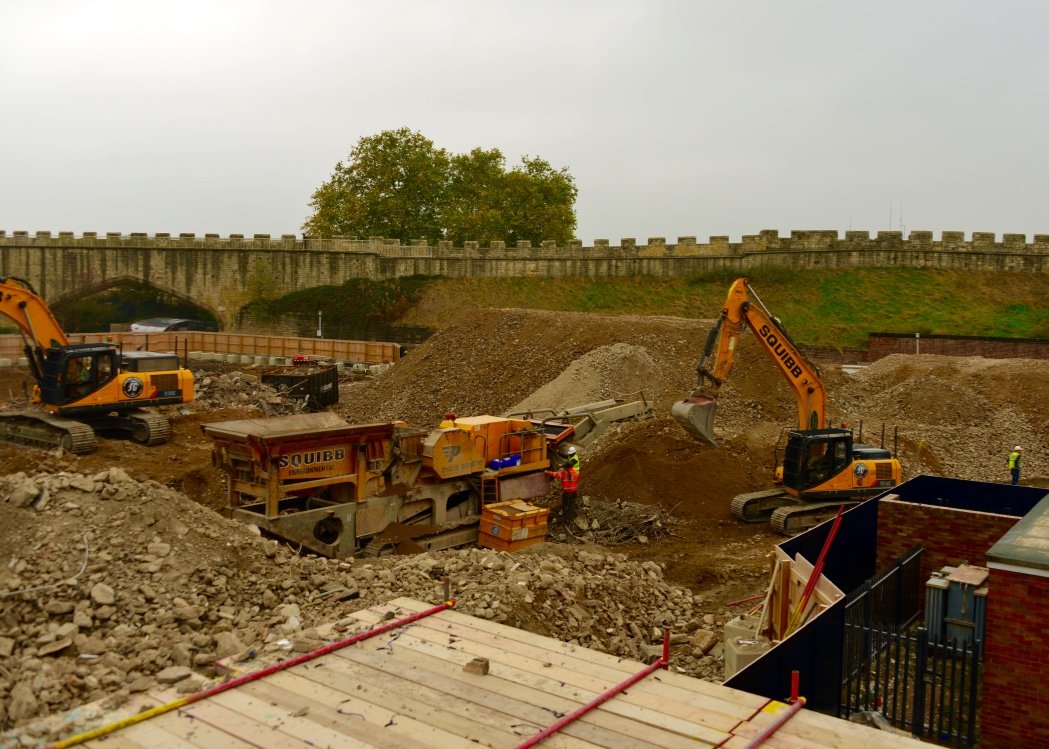 An entirely new perspective of the walls. Not a great view, but a new one nonetheless.

So farewell Hudson House, now a hole in the ground where Etty’s verdant vista used to be. But just remember - if it hadn’t been for Etty and his followers, we’d have knocked down the city walls as well. 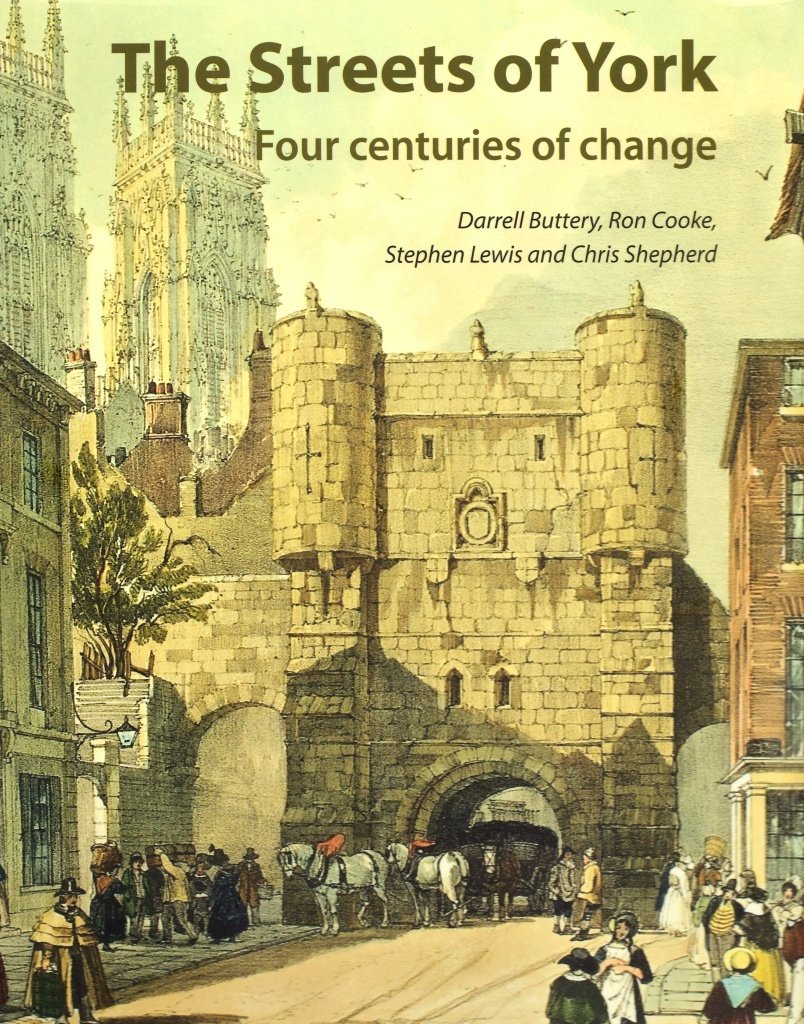 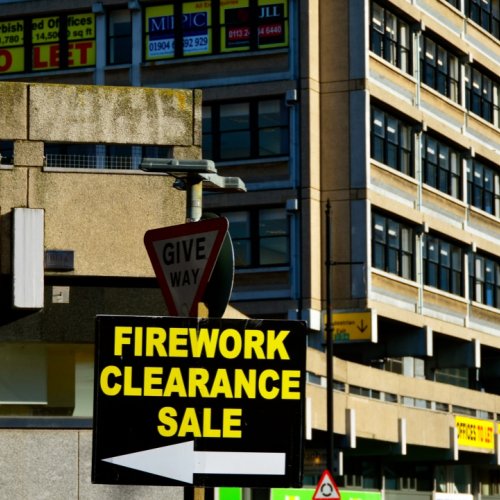