The Funky Gibbons by Alfred Hickling

On 2 September 1666, the citizens of London smelled fire. Over in the Netherlands, a brilliant young woodcarver of English descent smelled an opportunity. Grinling Gibbons (1648-1721) established a reputation as the greatest of all 17th century carvers; the Michelangelo of wood. He devised and executed some of the greatest decorative schemes to rise from the ashes of the great fire of London. But first of all he had to make a name for himself - and he chose to do so in York.

Gibbons left Rotterdam, the city of his birth, around the age of nineteen and found employment in the workshop of York’s pre-eminent architect and craftsman, John Etty. The precocious ability of this new arrival was soon advertised in a remarkable relief panel depicting a heavenly concert given by King David and St Cecilia. 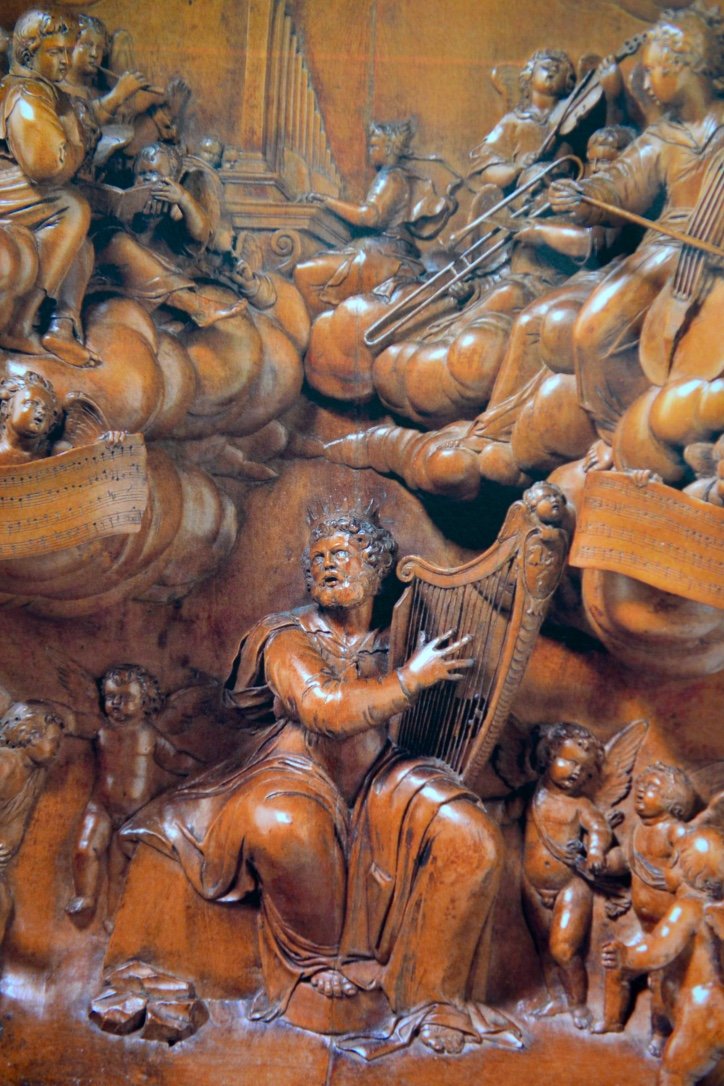 The subject-matter suggests that the work may have been created for an organ case; and though the boxwood panel is less than 40 centimetres high, it is several centimetres deep, enhancing the drama of the sharply receding perspective. In the foreground the king strokes a set of harp strings so gossamer-fine it is almost impossible to believe that they have been carved rather than threaded; while above him St Cecilia explodes from a cloud of writhing putti like a baroque cinema organist rising through the floor.

Gibbons’ earliest-attributable masterpiece was saved for the nation last year when it entered the permanent collection of Fairfax House; and now forms the centrepiece of an exhibition celebrating the woodcarver’s genius. It seems hard to believe that the King David panel could be exceeded as an exhibition of virtuoso display - but the exhibition contains an even more extraordinary object, on loan from the V & A, in the form of a life-size wooden cravat that Gibbons created for seemingly no other reason than to prove that he could invest solid matter with the tactile fragility of lace. The cravat was later owned by Horace Walpole, who once wore it to receive a group of European dignitaries and delightedly wrote: ‘the French servants stared and firmly believed this was the dress of an English country gentleman’. 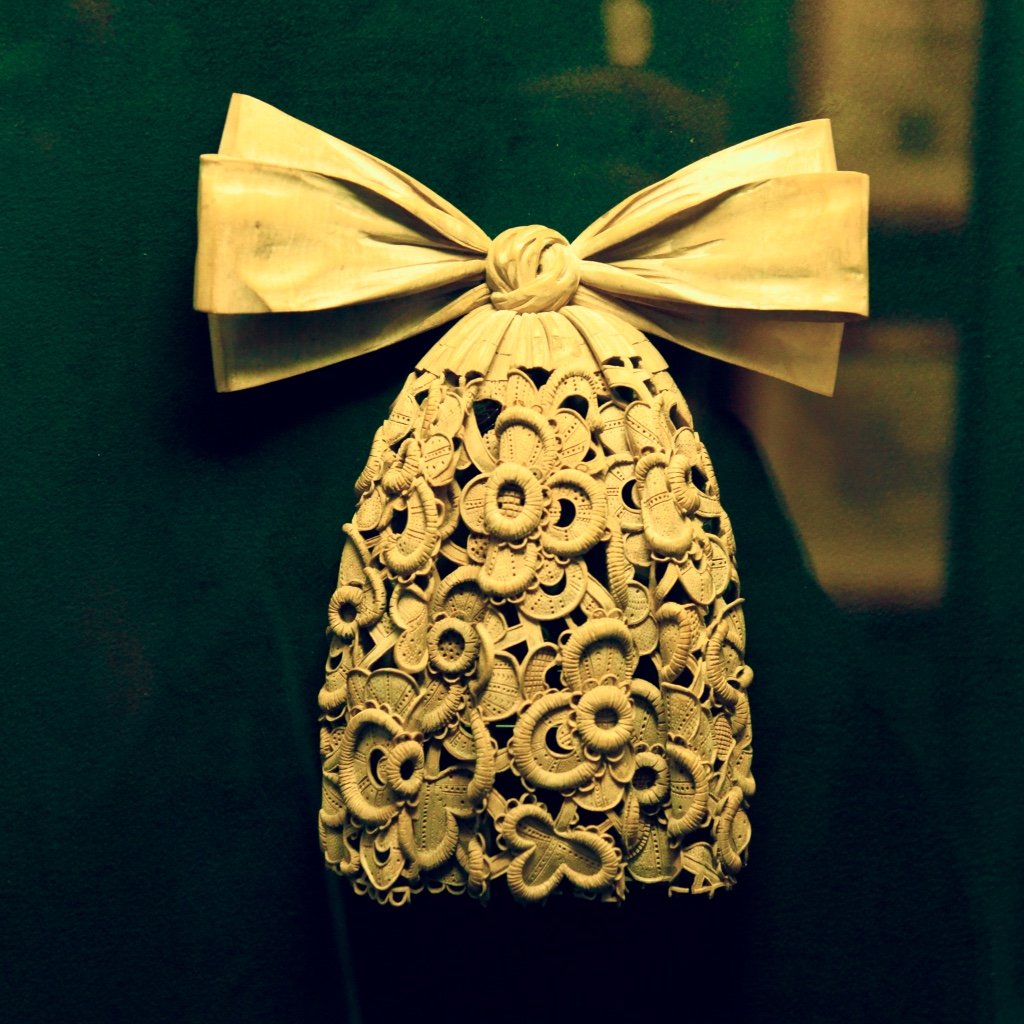 After leaving York, Gibbons settled in London where he was swiftly propelled into royal circles. In 1694 he was contracted by Sir Christopher Wren for the astronomical sum of £3000 to provide swags and cherubs for the choir of the new St Paul’s. But despite his unparalleled reputation as a woodcarver, Gibbons’ output could be slightly more hit-and-miss when commissioned to work in stone.

There is evidence of Gibbons’ inconsistency in the three funerary monuments he designed for York Minster. The finest of them depicts archbishop John Dolben luxuriously recumbent amidst bursting flora and somersaulting cherubs whose sensual athleticism bears out his reputation as the British Bernini. By comparison, the tear-stained putti grimacing on either side of Archbishop Richard Sterne’s tomb might be described as having faces only a mother could love; while the archbishop claps a hand to his face as if in sudden realisation that he has arrived at the gates of heaven having left the gas on. 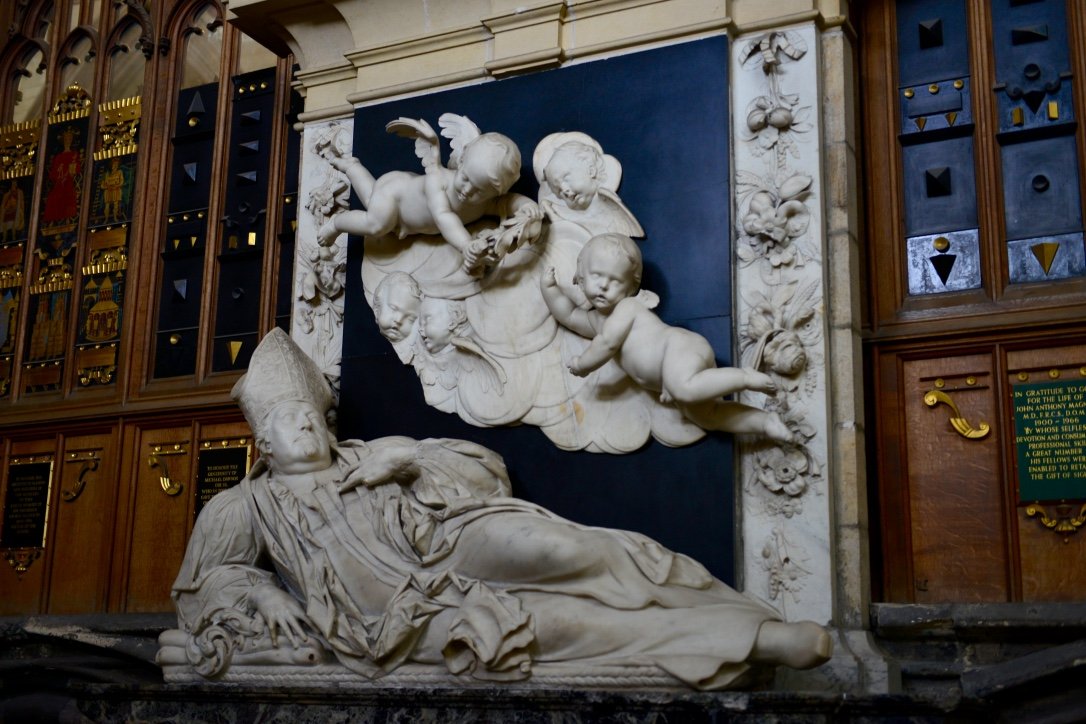 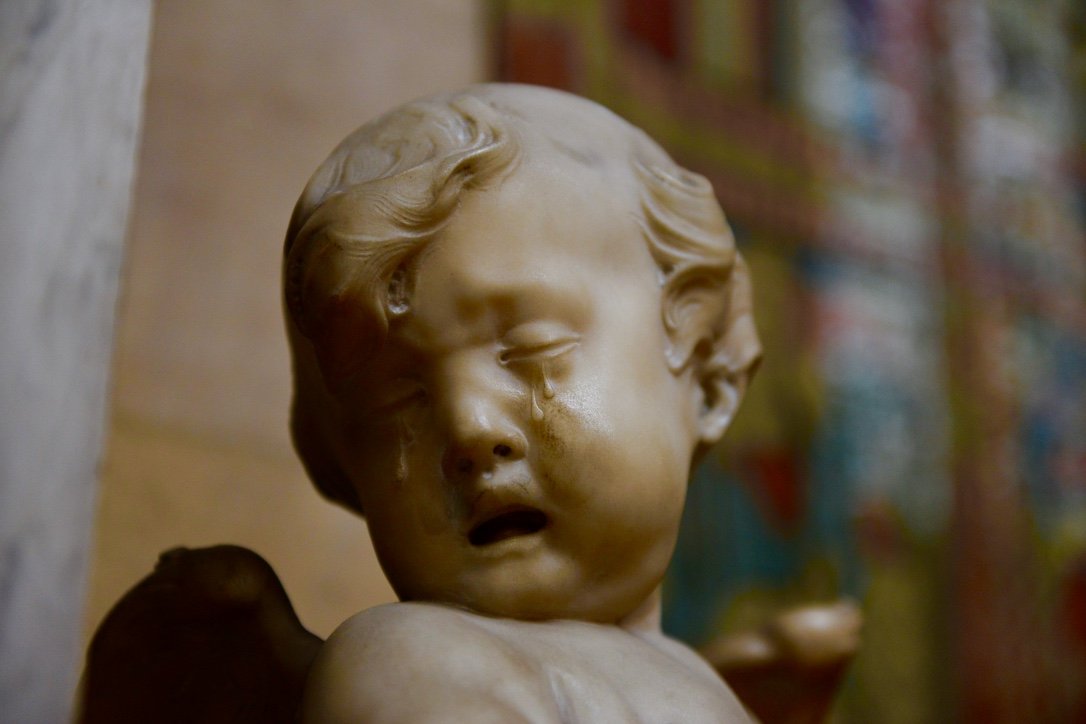 Either this putto is very upset: or his face is melting, 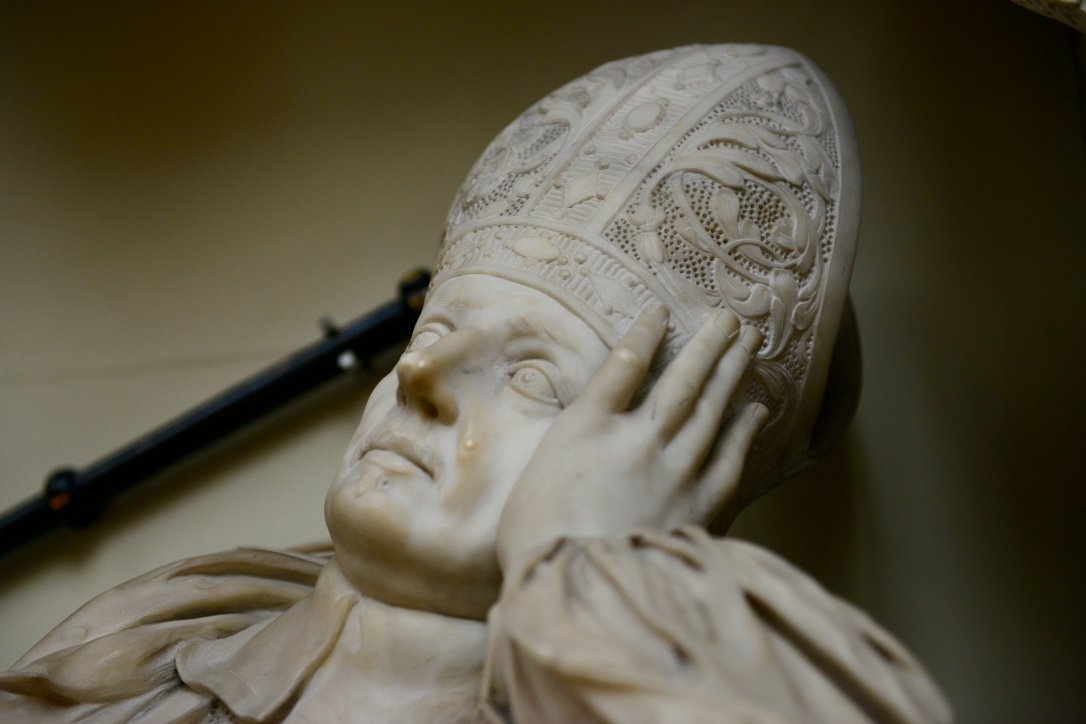 Archbishop Sterne has a senior moment

Yet it is the curiously robotic statue of Archbishop Thomas Lamplugh that must stand as Gibbons’ least-distinguished hour. Maybe the master delegated some of the inessential features to a less-accomplished colleague, or perhaps the effigy makes veiled reference to the fact that the archbishop cravenly vacillated during the Glorious Revolution; first denouncing the accession of William of Orange then meekly assisting at his coronation. Either way, we might be able to surmise that Lamplugh did not cut an impressive figure on the dance-floor, as the statue clearly appears to be standing on two left feet. 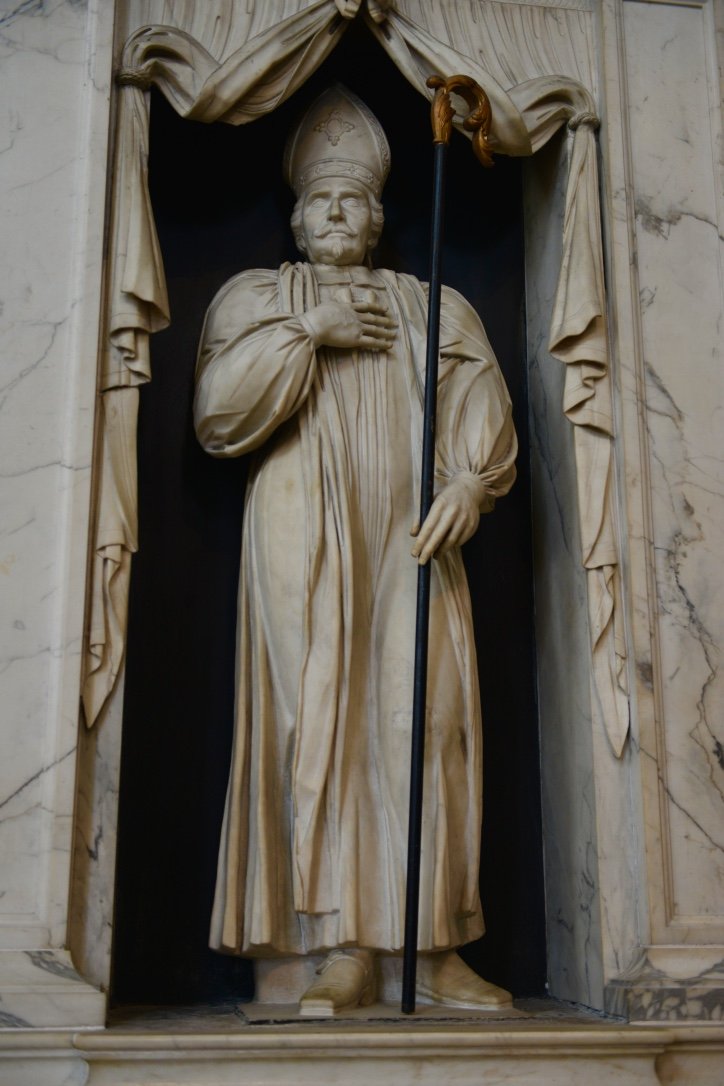 The Fairfax House exhibition is an opportunity to appreciate that Gibbons was far more at ease when working with wood on a more intimate scale; and augments original carvings with drawings, letters and the day-to-day paraphernalia of a thriving workshop. Amongst the documentary items is an original receipt issued to Thomas Lamplugh’s son for a £100 down-payment on the archbishop’s monument. There is no record of whether the family ever demanded their money back. 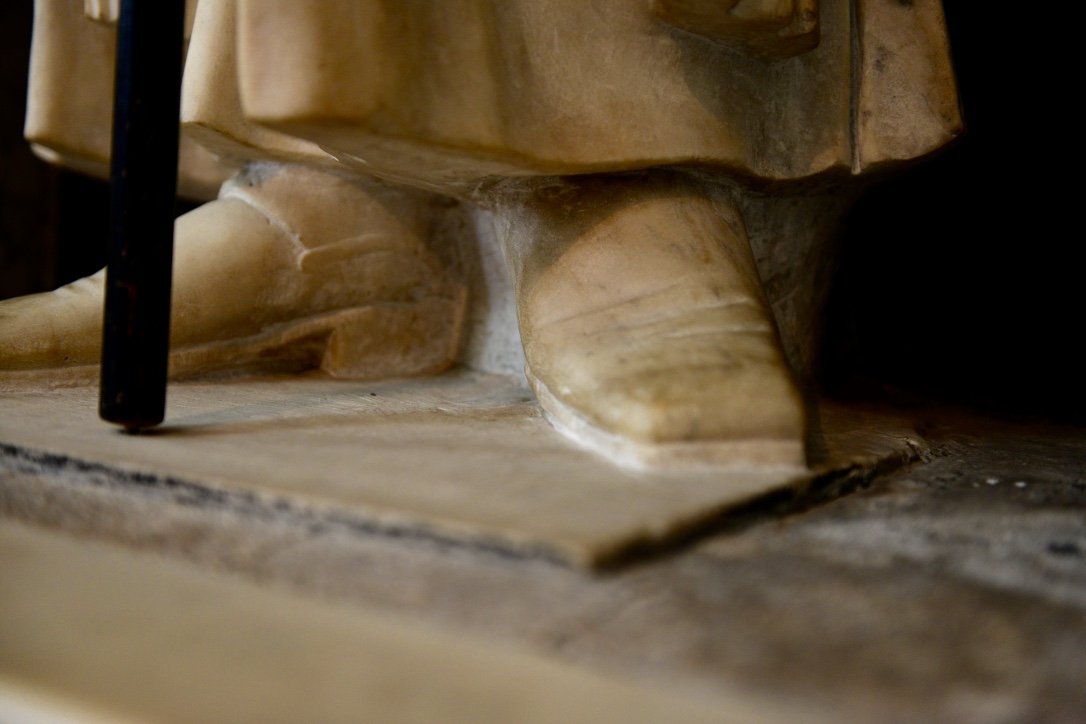 The Genius of Grinling Gibbons is at Fairfax House, York until 14 September 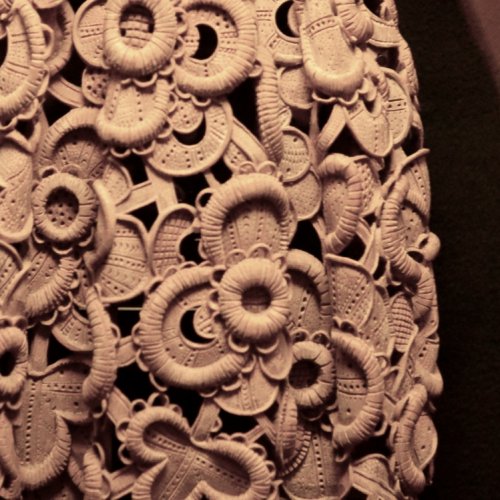