Standing Room Only by Alfred Hickling 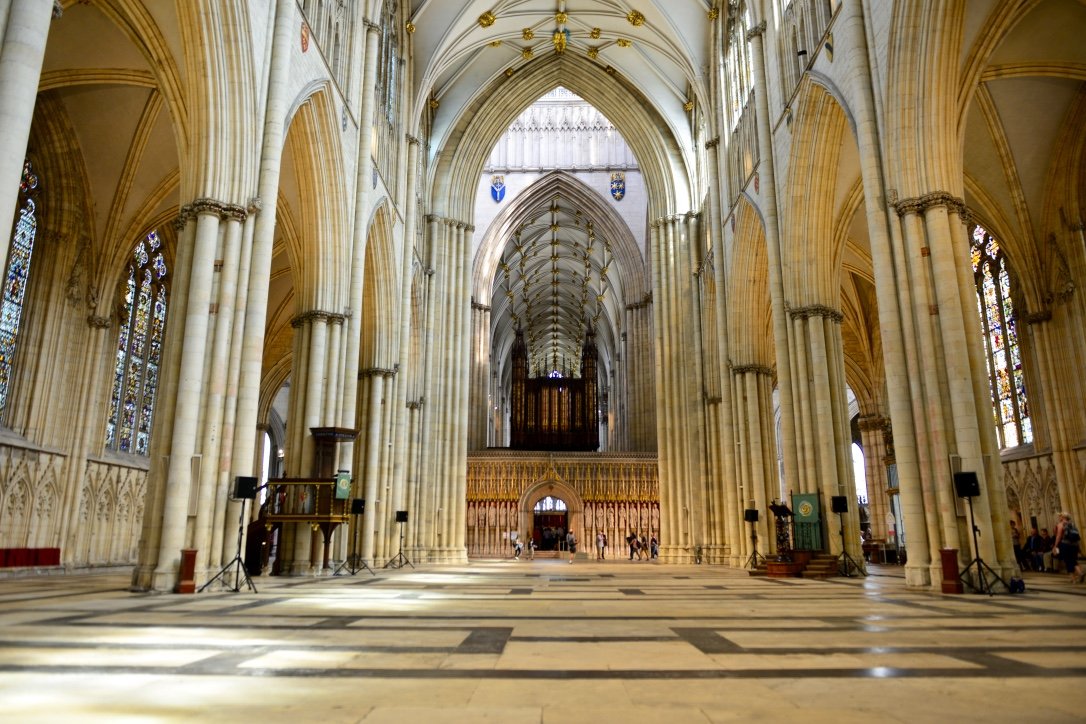 At the beginning of the 18th century the gentry of York had a problem. As a centre for society, fashion and entertainment, Georgian York was a place to see and be seen. But then, as now, Georgian York was frequently wet. The elm-planted avenue known as the New Walk had been created along the north bank of the Ouse specifically so the finer folk could strut their stuff. But where to go when the weather turned?

The New Walk. 'Not unlike nor inferior to any of the views in Venice' gushed the York Courant in 1754

The obvious answer would be to take a turn round the Minster, whose 207-foot nave provided the longest undercover promenade in the country. The trouble was, it was filthy. In the middle ages the nave would have been used for processions and burials, but since the Reformation it served no liturgical function. It was simply a giant, untidy space full of market stalls, petty crime and choirboys causing chaos. The floor was a mixture of earth, straw and uneven medieval gravestones. One’s best muslin gown would be ruined.

The answer? Send for Lord Burlington. In the 1730s Richard Boyle, the 3rd Earl of Burlington, was the most sought-after architect in the land. He had already graced the city with the Assembly Rooms, regarded as the first example of Palladian, neo-classical design in Britain (though ladies of quality immediately complained that the columns were too close-set for wide, panniered skirts to pass through). 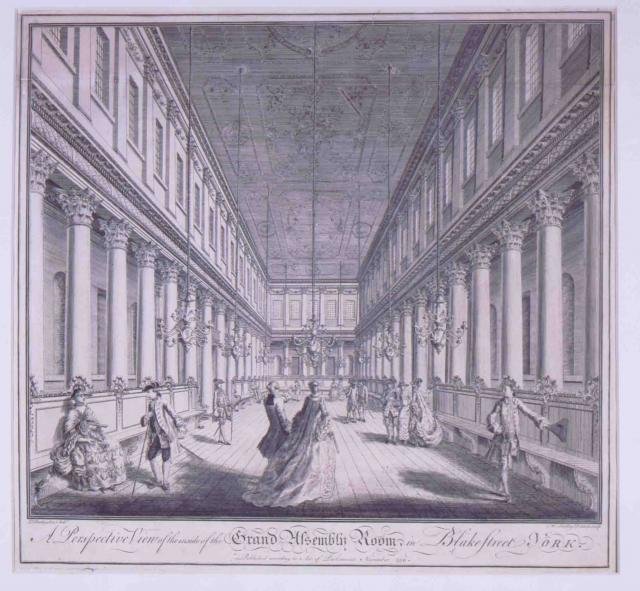 The stucco on the Assembly Rooms had barely dried in 1732 when Burlington was commissioned to completely re-pave the Minster for the then-astronomical sum of £2,500. No matter that the geometric key design in blue-and-white marble was 400 years at odds with the fabric of the gothic building, so long as the demi-monde had somewhere clean, contemporary and dry to show themselves off. (The biggest losers of Burlington’s scheme would be the people buried in the east end - an attempt was made to record the position of all the graves, but the key got lost. All that remains, to the puzzlement of many visitors, are a lot of enigmatic, random numbers inscribed in the floor). 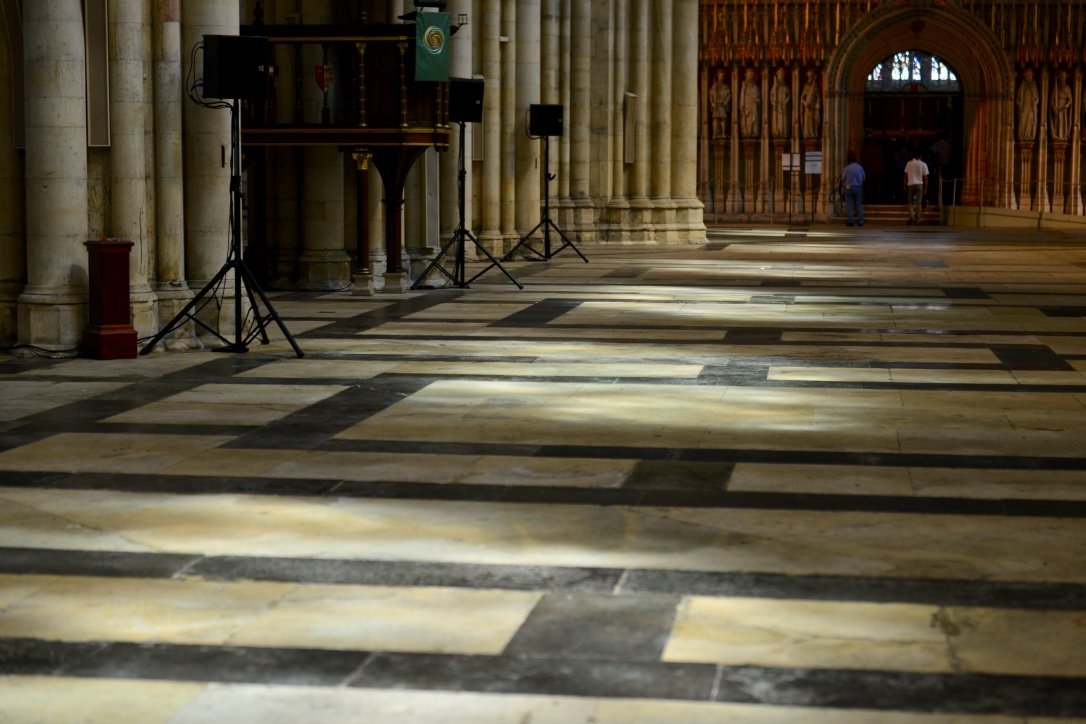 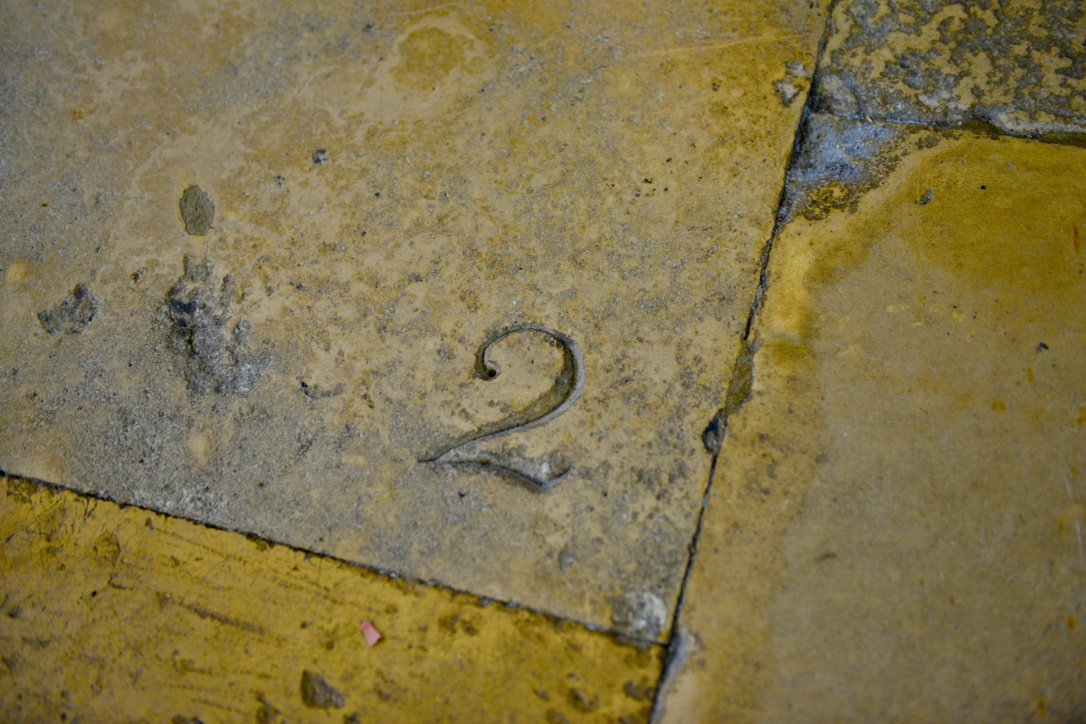 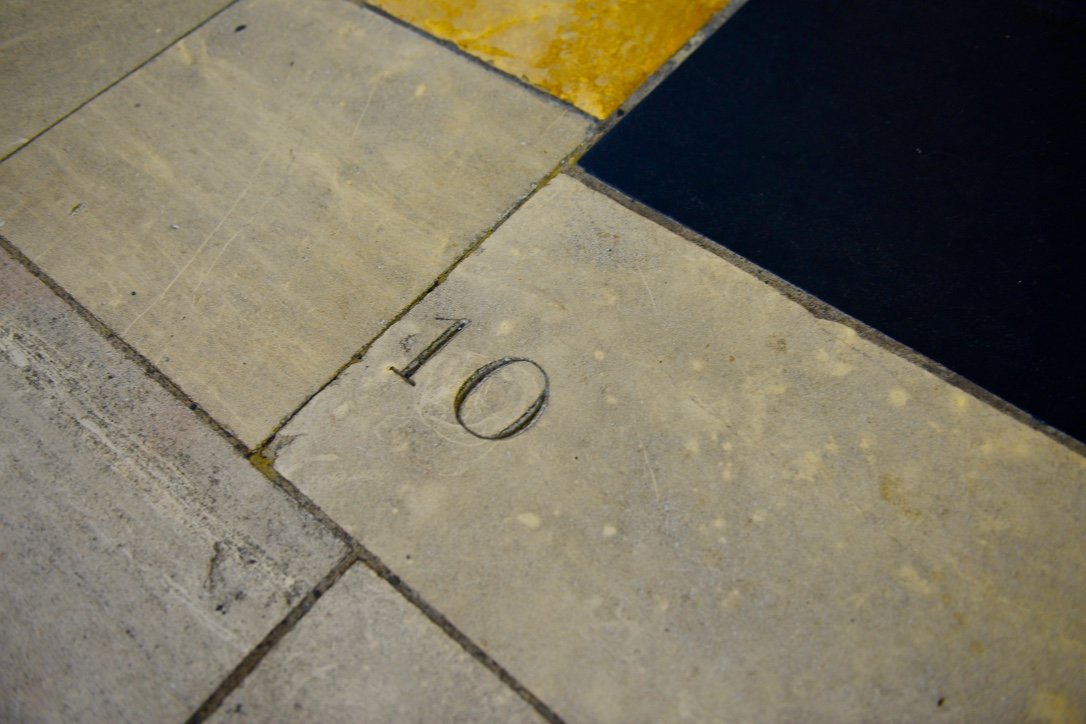 Mystery numbers on the floor. Somebody is buried somewhere round here. Unfortunately we don't know who.

Today, the glaring anachronism of Burlington’s promenade is less obvious due to the fact that there’s rarely an unobstructed chance to see it. The nave wasn’t used for religious services until 1863, when Dean Duncombe introduced heating, lighting and chairs - the idea being that if cathedrals were warmer, lighter and offered somewhere comfortable to sit, people would be more likely to attend. In this the dean was proved right, as his evening services for working people proved extremely popular. Yet since that time, the Minster has been full of contemporary furniture which detracts from the majesty of the yawning void that medieval naves were intended to be. 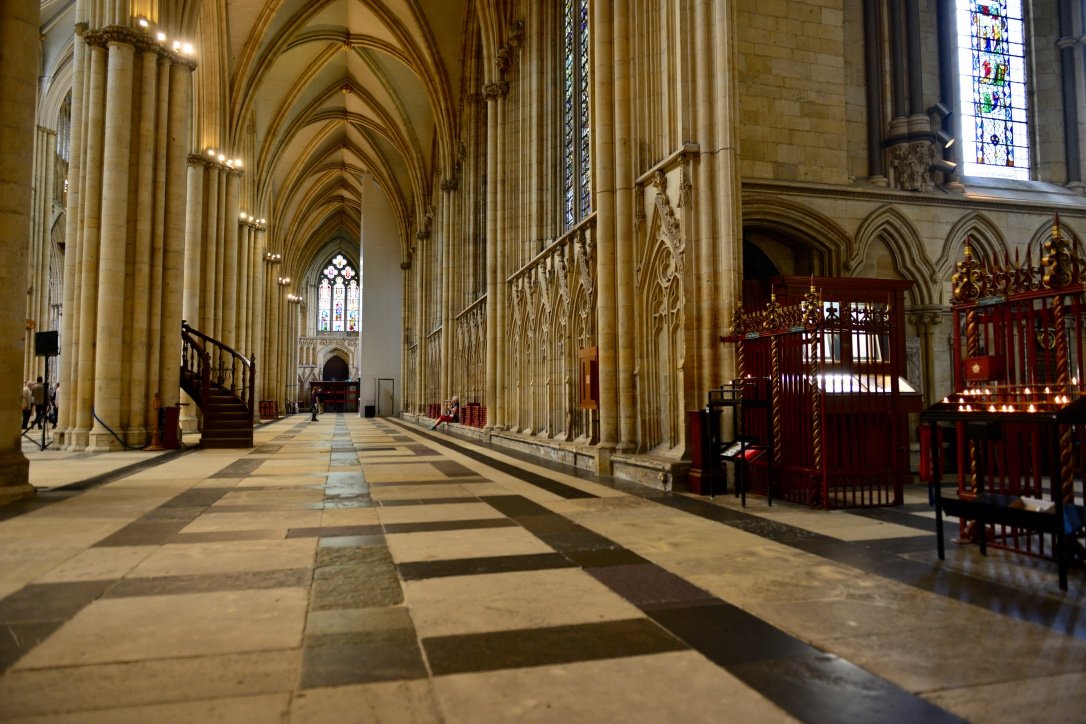 Originally the nave (which derives from the Latin word ‘navus’, due to the resemblance of an upturned ship) was conceived as an elongated antechamber to the business-end of the cathedral, where mass would be celebrated before the high altar. Only priests were permitted to penetrate this inner sanctum, with the nave acting as a holding area for the hoi-polloi. The original effect is best-preserved at Lincoln cathedral; where the wonderful absence of modern church furniture reinforces the football pitch dimensions of the medieval floor-plan. 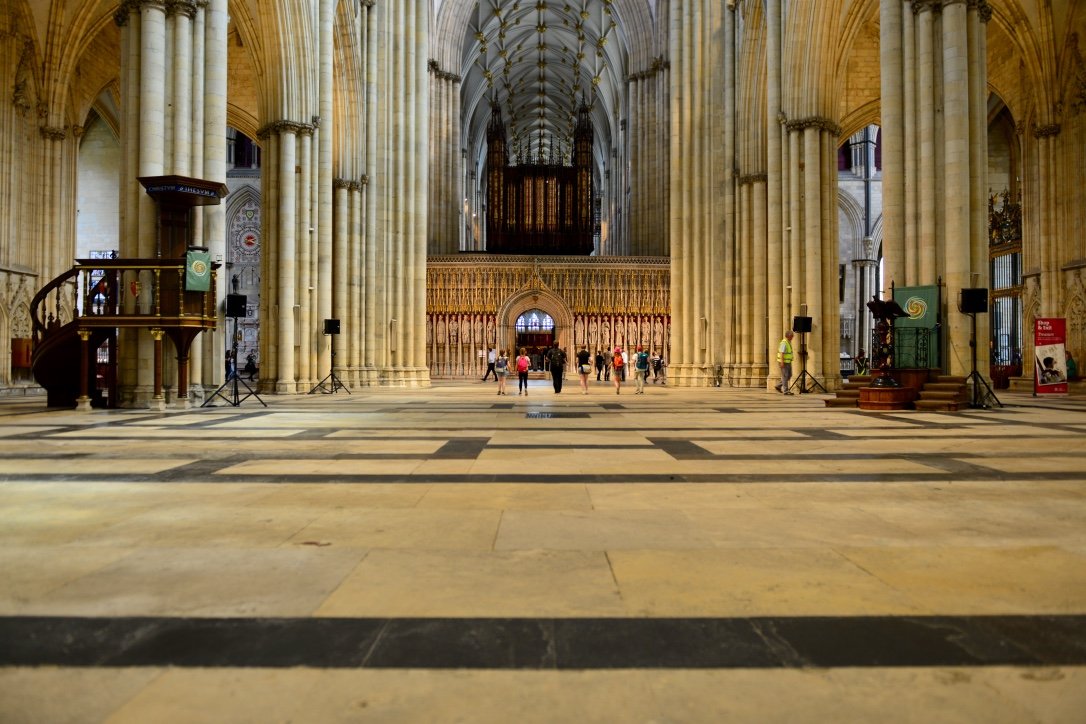 So it is a rare and truly uplifting sight to see the Minster’s nave completed cleared of the generic beech chairs purchased as a job lot in 1972. The temporary clear-out has been to create space for a son-et-lumière spectacular entitled Northern Lights, which promises to transform the nave into a vast, animated art installation. In many respects, the immersive experience, designed by projection and sound artists Ross Ashton and Karen Monid, is the contemporary equivalent of Burlington’s Georgian floor or Dean Duncombe’s evening services, designed to attract a mass audience to the Minster (as well as being a valuable fund-raiser for the stained glass-conservation programme). Yet by clearing out the trappings of Victorian worship, the Northern Lights project has returned the nave to an epic, unimpeded grandeur not seen since the late 18th century. Enjoy it while it lasts. 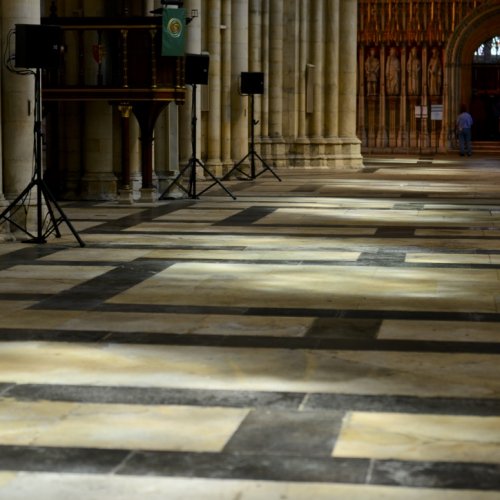