A Dickens of a Situation by Alfred Hickling

Yorkshire people are reputed - rather unfairly, we think - to be tight with their money. But could the most famous fictional skinflint of all, Ebenezer Scrooge, have been a Yorkshireman? There’s possibly the last chance to find out this month by paying a visit to the solicitor’s office that inspired A Christmas Carol.

It’s in Chancery Lane - no, not the one in London, but in Malton, 20 miles outside York. So what the Dickens was Dickens doing in a small North Yorkshire market town? The Yorkshire Gazette of July 8th 1843 reported, “We understand that Charles Dickens Esq the admired and talented author of “Pickwick”, etc is now on a visit with his lady at Easthorpe, the hospitable abode of Charles Smithson Esq Solicitor, Malton, and that he has visited Old Malton Abbey and other remarkable places in the vicinity.”

Charles Smithson was a close friend of Dickens, who moved to North Yorkshire to take control of the family firm of solicitors. Dickens would certainly have been acquainted with Smithson’s modest counting house in a narrow lane off the market square. The autumn following his visit, in a creative frenzy, the author completed A Christmas Carol in only six weeks.

Six years ago the office was opened by the Malton Charles Dickens Society as the Counting House Museum; with the words ‘Scrooge and Marley’ displayed in the window and volunteers in Victorian dress on hand to show visitors round. But the society is struggling to find sufficient funds and volunteers to keep the museum running.  The openings every Saturday in December (10am-1.00pm) have been advertised as the museum’s last. Try not to miss it: and let’s hope a benefactor can be found to cover the extremely modest costs of keeping the museum running. After all, if Scrooge’s Counting House were to close for the want of a couple of thousand pounds it would be the biggest humbug of all. 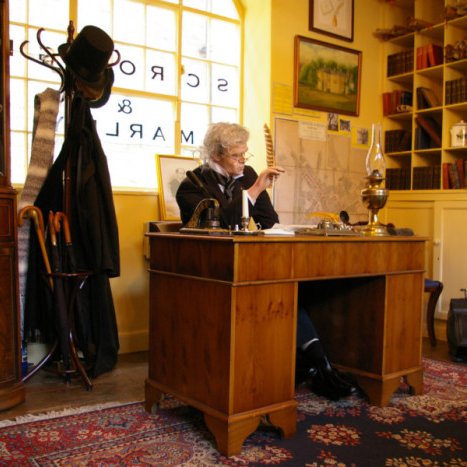